Hi, I’m Rachel Star Withers…badass stunt girl, YouTuber, adventurer and Schizophrenic. I am 31, I live in South Carolina, with my parents (younger brother is in the Coast Guard) and two puppies. 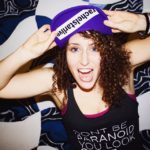 My Schizophrenia symptoms started when I was young. I grew up seeing monsters and urges to hurt myself. Around age 17 things got a lot worse. At the time I was away at a Christian school and they said everything was happening to me because I was demon possessed. They put me through an exorcism. Surprise it didn’t work. Finally around age 20, I was told by a counselor I was borderline schizophrenic. A year later I was fully diagnosed as a Paranoid Schizophrenic. Over the years I’ve also been told I had: Bipolar, Dysthymia, Schizophrenia-Effective Disorder, Personality Disorders. A few years back I had ECT (electroconvulsive therapy), and it knocked out a lot of my deep Depression and Paranoia which helped me manage my Schizophrenia a lot better. Although this past year the deep depression started to return.

11 years ago I came up with the idea of doing an Internet stunt show, RACHELSTARLIVE. It’s similar to Wild Boyz (a spinoff of Jackass) and Homestarruner. I started filming myself doing stupid stunts. Soon TV shows started contacting me and I started selling the footage. Some of the shows I’ve appeared on: America’s Got Talent, American Ninja Warrior, MTV’s Ridiculousness, Whacked Out Sports, Whacked Out Videos, SyFy’s Insane or Inspired. 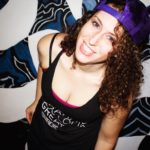 I decided one day to make a video called, “Normal: Living with Schizophrenia” about my struggles. Looking back I HATE how dramatic I seem in it but at the time I was terrified of making that video. Others came – dealing with Hallucinations, ask a Schizophrenic, Depression, Cutting… I started documenting my Schizophrenia… 10 years worth. My videos have been used in college classes and for mental health studies.

I am very big on saving yourself. Medication, Therapy, Doctors are all tools. You have to find your own way to use them. And what works for awhile may not later on. There is no magic pill/cure. Currently I am on an Antidepressant and an Antipsychotic and see a clinical nurse for medication management. But over the years the biggest help I have seen for my Schizophrenia is my dog Twinkle… She has been my lil rock. And can always tell when I am mentally off.

Track your symptoms, know your triggers, what works, what doesn’t.

I am very open about my Schizophrenia on social media. But in “normal” day to day life it rarely comes up. I would say most people have no idea unless I tell them. Whenever I start a new job I always talk to HR/my manager and tell them about my Schizophrenia. It’s important to keep up with your mental disorder. Track your symptoms, know your triggers, what works, what doesn’t.

You can still have a kick ass life, and you deserve to

One thing I always want to push to others with mental disorders is that YOU ARE NOT ALONE. Having Schizophrenia just means your brain works different than the normal… and that is ok. You can still have a kick ass life, and you deserve to.

A great thing that happened this past year was that I had my book Lil Broken Star: Understanding Schizophrenia for Kids come out on Amazon.