My name is Allie Burke and I’m a writer featured in several magazines such as Women’s Health, VICE, and Psychology Today. I’ve been writing for about eight years, five of those consisting of mental health advocacy. I live in Long Beach with my boyfriend and our three pets. I also work a full time job as a Quality Assurance Analyst.

Though I’ve been warned about negative language from other mental health advocates, I choose to identify as a schizophrenic woman rather than a person with schizophrenia as a way to own my illness as a part of me. Paranoid schizophrenia is a mental disorder that causes hallucinations and delusional thinking. I realized that my voices weren’t normal when I was a teenager. It started when I was a young child and didn’t feel manageable until over twenty years later. Being schizophrenic starts in the morning when you can hardly get up for work because the medication is so heavy. Those of us who live with this disorder joke about being on schizophrenia time. I really don’t function properly until noon.

Stigma is still very real around the world.

I am lucky to have a fantastic support system at work and at home. My boss, my father, and my boyfriend are all very supportive. Stigma is still very real around the world though, and I’m still not entirely comfortable being open about it, even though I force myself to be. My instinct, even after five years of writing about it, is still to hide.

The OCH Literary Society is an online literary magazine that exists for the passion of the written word.

The OCH Literary Society is an online literary magazine that exists for the passion of the written word. I was intensely inspired by a magazine in New York called Across the Margin and really wanted a place where writers would never have to be afraid of a rejection because their piece was “too literary”. After receiving so many emails myself with those exact words, I needed a place of my own. We’ve gotten great feedback from a number of writers, including those over at Across the Margin. They are still my go-to spot for inspiration and quality writing. 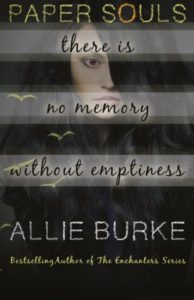 I’ve written several books, the most popular of them being Paper Souls. It is a novel based loosely on my life, about a woman navigating the world with schizophrenia.

I was officially diagnosed by a psychiatrist about five years ago. They initially diagnosed me with schizoaffective disorder before they changed the diagnosis to paranoid schizophrenia about six months later. They never explained how I came to be born with this disorder, but it made sense since I have two members of my family living with the same struggles I do. I’ve been on a handful of medications over the years. According to my most recent doctor, rare cases like mine that develop at a very early age usually have a tough time with medication. I’m on a good dose now that I combine with yoga, meditation, psychotherapy, and alternative methods called vibrational therapy. I’d like to say that I’m in control of it now since I’ve been at the same job for ten years and pay my rent on time (usually), but schizophrenia still slaps me around whenever it wants. I’m really hard on myself.

I think people are scared, and I want to help them not be scared anymore.

Most everyone I associate with knows I have schizophrenia. I force myself to be very open about it in my life because I want to help people. The most prevalent thing I have noticed about this disorder is that less people are open about it than they are about bipolar disorder or anxiety. I think people are scared, and I want to help them not be scared anymore. No one should have to live in fear of their fellow humans on top of a disorder that already makes them fearful.

Fiction accounts of schizophrenia, in my opinion, tend to be way off.

The best book I’ve read about schizophrenia is Elyn Saks The Centre Cannot Hold. It’s a memoir about her life and it got me through some really tough times in my twenties. That’s really the only one though. Fiction accounts of schizophrenia, in my opinion, tend to be way off.

It’s time for me to learn how to be a great advocate.

I’m really focusing on my health and internal well being for 2017. Now that I am surviving the disorder, I want to grow as a person. It’s time for me to learn how to be a great advocate. Someone people will remember as the schizophrenic who dedicated her life to her world.

Read one of Allie’s most popular pieces, What It’s Really Like To Live With Schizophrenia