Back to Reality: A Story of Psychosis

Hi, my name is Julia Stabler. I am 29 years old and passionate about mental health advocacy. Four years ago my life changed forever when I suffered a psychotic break. I was first diagnosed with bipolar disorder while in college, but a confusing second opinion led me to believe that I was simply a highly sensitive person. For years I experienced depressions that made me consider suicide and incredibly productive yet agitated manias.

In my delusions, my spirit was destined to save humanity from negativity, sadness, pain, and injustice.

In 2014 I lived in San Francisco while working in technology sales when a huge manic episode unknowingly ramped up over the course of a few months. Eventually, my mind slipped into a state of psychosis and my world became a fantasy. In my delusions, my spirit was destined to save humanity from negativity, sadness, pain, and injustice. I was on a mission ordained by the shifting energy of the Earth. I was no longer in control of my body. I believed I was a witch, an angel, a goddess, a princess, a superhero and an alien at various times over the days-long ordeal.

Her and my friends took me to the hospital where I was admitted to the psych ER.

My friends couldn’t make sense of my behavior or my words and it was scary for them. They called my parents while I spun around in circles. That behavior carried through into my hospitalization. Extremely worried, my mom flew down from Seattle right away. She has a nursing background and thought I had been drugged. Her and my friends took me to the hospital where I was admitted to the psych ER.

In my psychotic delusion, I believed that I was going to Hogwarts. In my mind, the hospital staff pretended to be muggles (Harry Potter jargon for non-magical people). They would smuggle me to the other side, flush me down a toilet or something, and I would be in admitted to witchcraft school.

A few hours after being admitted I was brought into a room with a two-way mirror. “When are they taking me to the other side?” I asked. The doctor was young and relatable to me. She explained to me that I have bipolar disorder and it caused me to go into a state of psychosis. I was experiencing a bipolar psychotic break. “But doctor, WHEN are they taking me to the OTHER side??” I was irritated this time. I wanted to know. The look on her face made me nervous. Holy shit she thinks I’m crazy. I had her explain it again and this time the world turned sideways. I suspected that she was right. My face scrunched up as I felt the deepest sadness I had ever known. ”So none of this is even real?” She shook her head and said, “No.” She was so sorry. I was to stay in the hospital so that they could help me. All at once psychosis took over again and I returned to the magic. The next day I was transferred to a psych ward in Berkley where I stayed for a week.

I became less psychotic and I began to understand what had happened.

Understanding that my delusions were not real was a gradual process. I trusted my family and close friends who convinced me to stay in the hospital and take medication. I was very skeptical, but according to the people I loved, this was the answer. They needed me to stay for just while longer, it would be over soon. It was a daily battle to convince me to cooperate. I hated it there. The staff was nice enough, but being around other delusional people was stressful. And I felt imprisoned. The doctor there just wanted to steal my magic. But I became less psychotic and I began to understand what had happened.

I am forever grateful.

Aftercare programs were highly suggested. The doctor released me in the care of my parents earlier than advised so that I could travel south to an outpatient program in Los Angeles. My mom and I stayed with my aunt and uncle, who live there, for a month. I was reluctant but went along with this plan. Deep down I knew that if the people I trusted most in this world most were this distressed, there must be some validity to their concerns. My support system took swift and decisive action. Their love, resolve, resourcefulness and teamwork proved extraordinary during the biggest crisis of my life. I am forever grateful.

The more I talked about it the better.

It was in my aunt and uncle’s home during aftercare that the antipsychotics finally began to pull me down and out of psychosis enough to recognize reality. As I felt the magic slipping away I began keeping a journal to help remember my time on the other side. I used the group and private therapy sessions during the day to start sorting out what had happened. The more I talked about it the better. At the time I didn’t think it was helpful, but looking back it was. Aftercare was also just a place to wait for the meds to kick in. Psych meds take time to work. My family didn’t have to worry about me while I was there. They had some relief too.

Relationships are important to me and I think that this trait of my personality might have helped me come back to reality. I wanted to come back. At this time I began calling other friends and also some acquaintances to tell them what happened. In most cases I wanted them to understand why I had said or done some things that were out of character for me. I apologized for my manic behaviors more than a few times. In other cases I just needed support.

Healing from something is a process. Nothing happened all at once.

After my month in aftercare, I moved home to live with my parents in Seattle. Luckily I found a great psychiatrist, who still four years later, acts as my therapist as well. My work with him helped me refine the difference between reality and fantasy. It took work. I worked through trauma and anxiety too. I couldn’t watch sci-fi, fantasy or scary movies for a long time. Healing from something is a process. Nothing happened all at once. I was lucky that I found a doctor who made me feel safe in sharing and who had the tools to guide me through.

I experienced my only manic episode since the hospitalization about two years ago.

I experienced my only manic episode since the hospitalization about two years ago. I had forgotten my Lithium for three days and was also very stressed. While not totally psychotic yet, the mania made me paranoid and delusional. I left my home to run away from bad guys who were after me. I had a bag packed, was looking for safe houses and planning to leave the country when a trusted friend told me that he thought I was having a manic episode. I sat down and ran through the list of symptoms out loud… paranoia, grandiosity, sleepless nights, agitation, possible delusional thinking… I was totally manic. Shit! Initiate emergency plan. I called my doctor and left a message. Then I called my mom. I was so sad… Not again. I went to my parent’s house and slept off the mania with antipsychotics prescribed my psychiatrist. I was out of work for a week. This time it was much easier for me this time to recognize my delusions. I bounced back pretty quickly. Since then I have not had an episode.

The hardest part about experiencing delusions, hallucinations, psychosis…. was coming to terms with the fact that while those experiences very much impacted my life, those thoughts were not reality. It’s a process. At some point, I had to decide to let go and focus on the world here and now right in front of me. I glad I did. 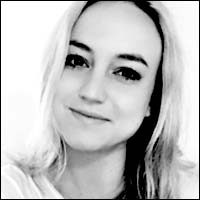 Julia StablerSchizophrenic.NYC – Guest Blogger
My name is Julia Stabler, I am 29 Years old and I have bipolar disorder. I reside in Bellevue, Washington which is a city near Seattle. Here I enjoy furthering my efforts in mental health advocacy while building a business as a men’s custom menswear stylist. To read my stories you can visit my website julialivesbipolar.com and my Instagram @julia_lives_bipolar. You can also follow my professional and personal Instagram @jstabler.