Should My Mental Illness Stop Me From Having Children? – By Taylor Jones

There are a lot of big debates in the world of mental illness. What’s better, holistic care or big pharma prescriptions? Assisted suicide or more intensive counseling? And of course, does mental health really exist (let me answer that with a big, fat yes). But as I’ve adventured into motherhood (and my 20’s) I’ve discovered a common question, even with those who aren’t struggle with a mental illness, is the question of it is right or appropriate to have children.

Can you handle being a mother?

Becoming a young(er) adult you get asked a lot of questions about schooling, careers, when you’re going to settle down and more by people who (quite frankly) really don’t need to know what you’re up to. Personal questions seem to be mistaken for common FAQs to people who don’t really know your business. As a woman I know a common question asked among my friends and myself from time to time is when we’re going to procreate and become mothers; which once again isn’t anyone’s business. But the question shifts slightly when you are public with your mental health. Is it fair to subject a child to that? Can you handle being a mother? Aren’t you scared of passing your crazy to your kid?

My husband even received a message from a former friend of mine informing him I had been to a psych ward and that he should leave.

I became pregnant at 21 with my son Jack. My situation wasn’t ideal, I wasn’t living anywhere, I didn’t have a job, and I had just entered into an engagement with my now-husband. Invasive questions flooded my inbox from time to time, asking if I thought it was a good idea to keep the baby, if I needed to know abortion services, or even adoption services (I’m adopted, so the thought was extremely devastating to me). Occasionally I’d receive a what the fuck are you thinking? followed by several insults to my character, and several names being called. My husband even received a message from a former friend of mine informing him I had been to a psych ward and that he should leave.

I was inspired by their strength. They gave me hope.

But despite the people urging me to not have a baby due to my situation and my medical diagnosis my pregnancy was pretty alright. We got a home, we both had full time jobs, and my mental health actually stabilized out throughout the majority of my pregnancy. Closer to my due date my depression took a dive, and I did admit myself into a mental health program. I was only a few weeks away from my due date, and it kept me going. I also was able to network with other moms in the program, and was inspired by their strength. They gave me hope that I wasn’t going to be a lost cause of a mother, and would be able to raise my son just like anyone else. 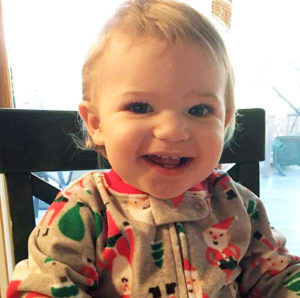 After 3 days of induced labor, and one c-section later, Jack was born! The first few weeks were hard. My postpartum depression kicked in and was a lot more intense than I ever expected. I frequently thought of running away or ending my life. I felt like I wasn’t a good enough woman to raise Jack. To top it all off I had surgery complications, elongated bedrest, and even left work entirely. My depression was bad most days, but my husband reached out to our community. We ended up becoming involved in a program where a caregiver comes out at least once a week and helps us learn what Jack needs. She’s also aware of my mental health problems, and has actively helped me find therapy, and does checks on how my postpartum is, even a year later.

I know what to do when I’m in crisis, I’m not afraid of losing my son or putting my family in danger.

I won’t lie to you; having a child while maintaining a mental illness is hard. It’s one of the main reasons I work from home now. There are days that are near impossible to get out of bed, and sometimes I feel like I’m losing my mind more and more. But between the support of my community, and the loving looks my son gives me, I know it’s possible. I know what to do when I’m in crisis, I’m not afraid of losing my son or putting my family in danger. I know how to take care of myself, and when it becomes unbearable I know where to go for help. After 15 months of Jack being alive, I can say I’m a fantastic mom (at least most days). On a personal note,however, I’m not sure I could have more than one child (but hey, that’s just me).

You are not obligated to have children, and it’s not a sin to have a child, even if you have a mental illness.

Bottom line is this; you can be a parent, or you could choose to opt out of the experience. Both ways of life are beautiful, and are entirely up to you! You are not obligated to have children, and it’s not a sin to have a child, even if you have a mental illness. If you choose to have children, and are concerned about them developing your illness, learn about it! Be prepared so you can help your child avoid any mishaps you went through, and work on breaking down stigma so they are encouraged to get help. If you choose to not have children because of your mental health, that’s okay; a child isn’t on your life’s checklist, and it’s not an obligation. Having a child is entirely up to you, and you don’t owe anyone an explanation. It’s your life, and if you choose to bring another child into it, the most important thing to remember is to take care of your health and listen to your body. Your family planning is your choice, and no one else’s opinion should matter.

Taylor NicoleSchizophrenic.NYC – Staff Blogger
Taylor Nicole is a 23 year old mother, writer, and advocate for mental health and for foster children. Her memoir, Free Tayco, will be available for purchase on April 7.