The Beautiful Paradox – A Story of a father with Schizophrenia

My primary carer when growing up was my father. As a painter/schizophrenic HE was the best of playmates. His vivid imagination and heightened good moods made him the most exciting and fun person to play with. It was on his downward spirals however, when his paranoia got the best of him. At these times things were not quite as fun. He was never violent or aggressive, he never raised his voice. He was always gentle, always the most loving of parents; he was never late to pick me up from school, no matter his head space, which made me luckier than many. Then one day he wasn’t there to pick me up. My father passed when I was nine, and the impact of this sudden parting of my playmate and protector affected me into my teenage and adult life.

A common thread that ties me to my father is that I am diagnosed with bipolar disorder (a branch off from schizophrenia). I am told this may have been passed down to me from him. I self-medicated my mental health issues, blocking out the voices and following trauma from my teenage years, with alcohol and other things. It is during that time that I made a pact with myself; to end my life and join the 27 club. I ran away to London in 2014 to pass the time until this fateful day, faking interest in a BA Photography for the student finance money.

It was this decision, unbeknown to me that was instrumental in ultimately saving my life.

Photography had always been a part of my life: I had forever taken photographs and my journey of healing began with my introduction to the theory of “Pathography” by photographic artist Dr Spencer Rowell, who had used self-portraiture photography in his MA as a therapeutic tool to confront personal trauma. For me his work portrayed a mix of the masculine physical challenge with the vulnerability of a child. There were elements of the wounded male sexuality but, first and foremost, he used photography with his childhood memories, that his body might move through his own questions. This idea was developed further by Rowell in his PhD (2017) and can be found on his website. The word pathography was used by the psychoanalyst Sigmund Freud on the last page of his psychobiography of Leonardo da Vinci.

Freud theorised that an analyst might examine the work of an artist and in doing so reveal something of their unconscious, internal world. After reading his book, I realised that he had broken many of his own rules for his psychobiography to be valid. A psychoanalyst, by profession, is objective, which requires emotional distance when they are with patients, so I am now strongly of the opinion that to put an artwork into that dyadic situation is to remove the potential for personal resonance and projection.  In the last five years I have developed my own methodology of “Auto-pathography”, in which I leave a finished artwork for a time and then come back to it, audio recording a “session” with it, verbalising what it speaks back to me of myself, though the artwork is the analyst and the self the analysand. A chemical imbalance in one’s brain makes this quite interesting, and I’m not always sure that the voice I hear is my own. Though we don’t always agree with each other, and since he left my university at the beginning of my MA degree two years ago, Rowell still to this day remains a forthright protagonist/mentor figure in my life, for which I’m very honored.

After extensive research, I immersed myself in re-enactment phototherapy

After extensive research, I immersed myself in re-enactment phototherapy, which was originally developed by Rosy Martin and the late Jo Spence in the 1980s. It’s important to say that Rosy, always kind and tolerant, has been very generous in giving her time and knowledge to me, advising me in the development of my work. She explained how Spence and she worked together, one taking the role of sitter/director, the other photographer/therapist to work on and through past traumas in their lives by re-enacting these in performative actions, and transforming them, whilst held and contained by the therapeutic gaze of the other. My sessions, however, are done solo, with a camera set to shoot continuously, all the while audio recording on my phone, capturing not only my image but the stream of unconscious narratives provoked by putting myself in these roles. This is not the true phototherapy developed by Martin and Spence, but a solo-phototherapy of sorts, which, coupled with Auto-Pathography, has become my own tool for self-discovery, reflection and healing. I recreated a school photograph of my father from when he was nine, trying to get back in touch with him, and, using these two images and a third of me when I was a child, I made series of ten mixed-media Rorschach tests. These and other experiments can be viewed by searching #PartedVanishedSRP on Instagram. 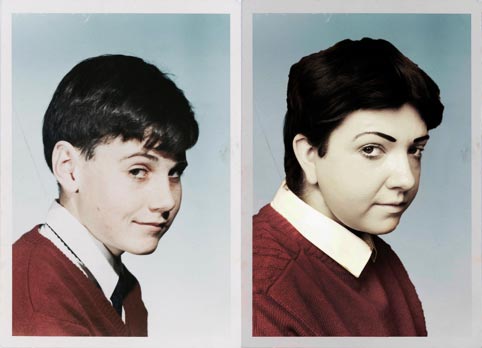 In my deep depressive states, it is my practice (inspired by Rowell and Martin’s work) that helps me move forward. I replace the dark voices in my head with theirs and the voices of the other photographers I met through my studies at the The Sir John Cass School of Art. I am so lucky that they gave me the tools to fight, and a purpose to keep on living. I’ve now bypassed the 27 club, just turning 28 and graduating a research MA, and it is now that I feel strong enough to challenge what I fear, and help pass my experience on to others who are fighting with their heads daily.

My current photographic art practice is embarking on reenacting or recreating the rare visual hallucinations that come to me, to make them seem less real. The hallucinations, a common symptom of my father’s paranoid schizophrenia which is not always present in those with bipolar, are what I fear most. My greatest wish is to advance my work at PhD level, to show the world we are not just our diagnosis.

One day I will put my completed thesis, an extension of Rowell’s research on my bookshelf. This will be the acknowledgment to my father, that he was also more than his diagnosis. He was a son, a husband, and the greatest dad anyone could have been lucky enough to spend nine years with. 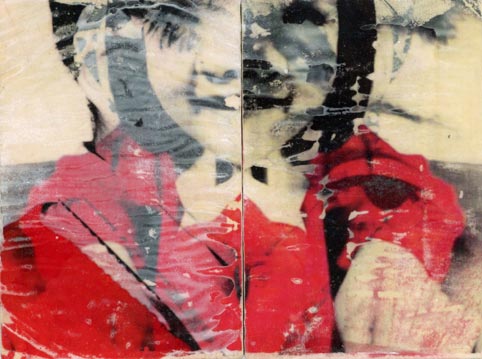 “The tragedy is you want your dad to see this but of course if he was here, he would never see this. That’s the beautiful thing, if it wasn’t so tragic. The beautiful paradox of your life; you create this fantastic art because of what happened.”

My thanks go to the Schizophrenia.NYC’s founder for what she set out to do and everything she has done.

Leeds born photographic artist Jenny Nash studied an extended diploma in photography at Wakefield College before moving to London to attend The Sir John Cass School of Art. She trained at the Cass photography department under internationally exhibited photographer Mick Williamson and his team and gained her experience and training from both the photography lecturers and photographers who she met through the Cass. Nash has has been lucky enough to work alongside curators such as Zelda Cheatle and Laura Noble, Susan C Andrews (manager of The East End Archive) and the 3 founders of the photographic collective Uncertain States, Fiona Yaron Field, David George and Dr. Spencer Rowell. Since completing her BA Photography and Masters of Research, Nash intends to further her research into photography as a psychoanalytic tool by completing a PhD and she is considering a foundation course at the London Institute of Psychoanalysis. Jenny Nash’s work has been exhibited in both the North and South of England.